Candied pecans are the greatest thing since sliced bread (an absolute 100% fact ?) Then again, if you give me nuts and sugar, I’M SOLD! The first time I had candied pecans, I was forever a changed woman (or girl, I should say). It was back at my restaurant job in high school, The Carvery. They had this Cobb salad that was topped with fried onion strings (YUM) and candied pecans (DOES IT GET ANY BETTER THAN THIS? ANSWER: NOPE). I always poured a very large sum of candied pecans on a plate for myself during my break and would often go back for seconds or thirds. Hey, nuts are healthy, right? Especially these nuts. Candied pecans, mmm. You can use this recipe to candify any nut, but I like to use pecans because they have that softer bite and they have more areas for the sugary mixture to cover. But there’s just something about the cinnamon sugary flavor with the crunch of the nut. I’m all about the crunch. It’s a sweet snack that is perfect for almost any occasion! I made a batch of these last year for Christmas and everywhere I looked, there were handfuls of candied pecans!

And the best part is these candied pecans aren’t strictly for Christmastime. As much as they may LOOK like a Christmas dessert, these can be made year round, hence why I’m making them in April! Also, National Pecan Day is in April so it’s perfect! They make for a great gift for teachers, friends, co-workers, heck I’m even putting these candied pecans in Ziploc bags and taking them with me to snack on throughout the week! Honestly, the most difficult part throughout this whole process is waiting for them to cool down. You’d think I would learn my lesson by now but, alas, I still burn my fingers and mouth because I don’t have the means to stop myself from eating them right out of the oven!

These candied pecans send me right into dessert heaven and I hope they do the same for you! 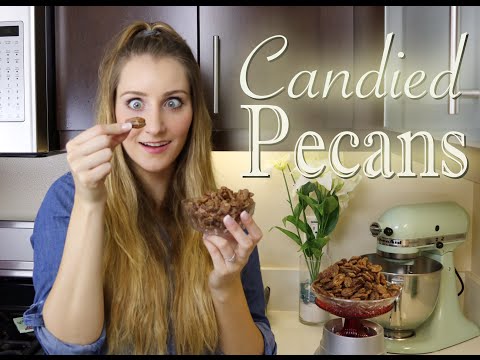 Want to join the discussion?
Feel free to contribute!

Because these cookies are strictly necessary to deliver the website, refusing them will have impact how our site functions. You always can block or delete cookies by changing your browser settings and force blocking all cookies on this website. But this will always prompt you to accept/refuse cookies when revisiting our site.